Toy Hunter buys for a Museum 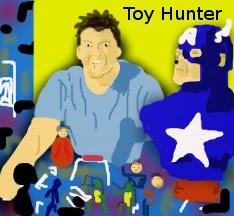 Jordan is at it again. Digging though basements and toy chest to find rare items that can be displayed at the Hall of Heroes.

Jordan and Steve started off the episode by talking about the Battle Cat riding toy he bought last episode. After getting a call from Alan at the Hall of Heroes, Jordan had this weeks quest of finding old super heroes merchandise.

In walked in a customer with some old tin toys and a very cool metal Batmobile. The guy just wanted to get his stuff appraised. They had belonged to his grandfather.

Jordan headed off to Ohio to look for some toys. He first met up with a father and son team who had a huge Masters of the Universe collection. Unfortunately the guy opened up pretty much all the figures to save on storage space. Even the sealed vehicles had damaged packages. Toy Hunter gave Star Ship Eternia a nice showing. They explained how it's from the relaunched line, and one of the few popular pieces from that 90's version of He-Man. Jordan and his buddy Dave ended up picking up a close to complete set of Masters of the Universe toys for a little over $6,000.

Next Jordan and Dave went to Jamie's house to see his enormous Superman collection. One of the first items they showed off was a Superman string puppet display. Next they looked at a set of model sheets from the Hanna Barbara Super Friends cartoon. Then the boys found a non Superman item to try to buy. A little statue of Captain Marvel (Shazam!) from the 1940's molded in plastic.

Jordan and Dave finish their trek to see the Hall of Heroes comic book and toy museum. This place has comics, toys, and animation cels all related to super heroes. I may have to plan a trip some day. I'd enjoy looking around. I wonder what the owner of the museum, Alan, does for a living. Running a small museum can't have a huge pay check.

Jordan's first couple of finds did not impress Alan. The Captain Marvel statue was a hit and Jordan got his big sale. I enjoyed the fact that his weeks big client was a museum instead of a celebrity.