Continuing with my series on my Barrel of Plastic Figures, today I'm highlighting some Cowboys and Indians. 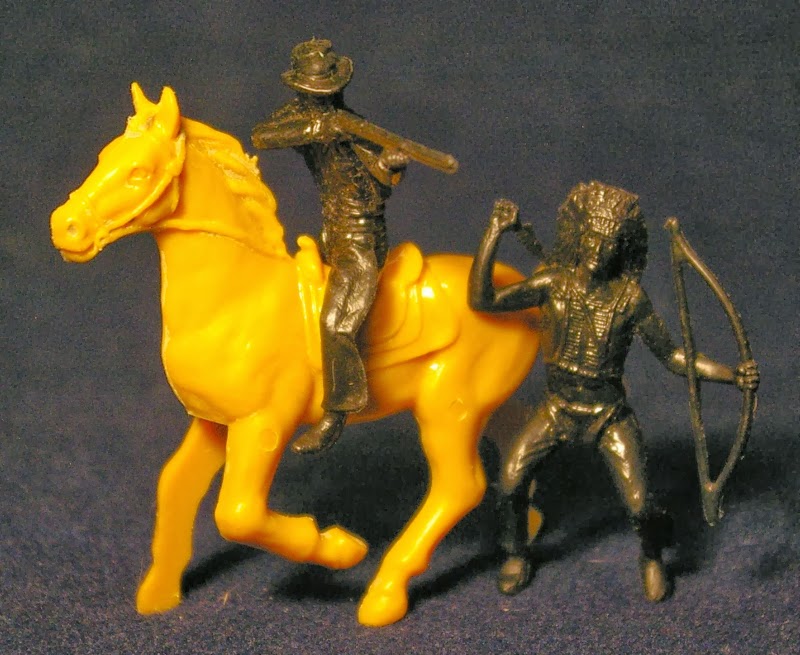 Most of these figures came in one set I bought as a kid. They came with a vinyl play mat.. The set included a stage coach with horses, two horse to ride on, and several figures.

Here are the two rider figures included in the set. The set came with this horse and another one in a bucking bronco type pose. I painted that one black with a fiery mane like the Magic the Gathering card, Nightmare. 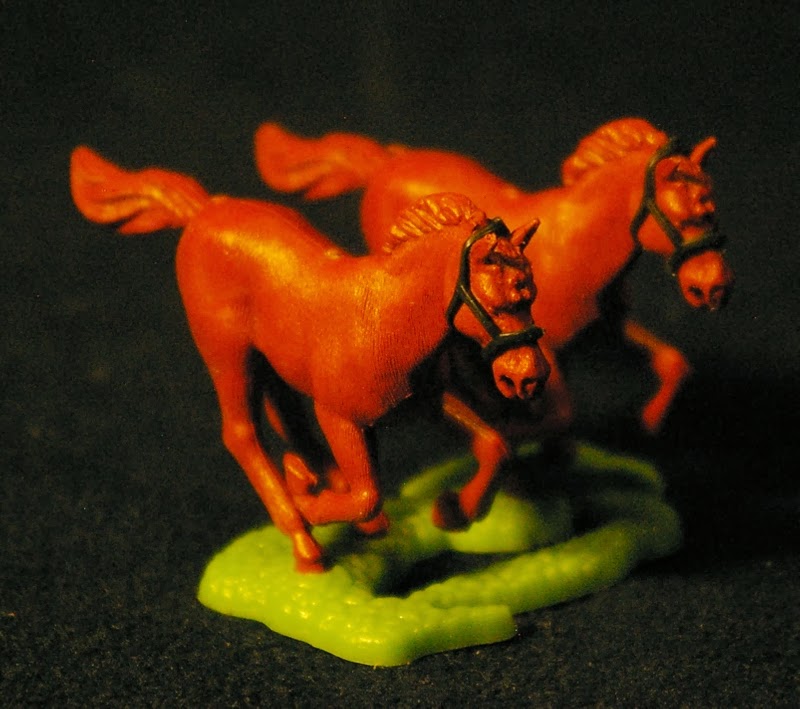 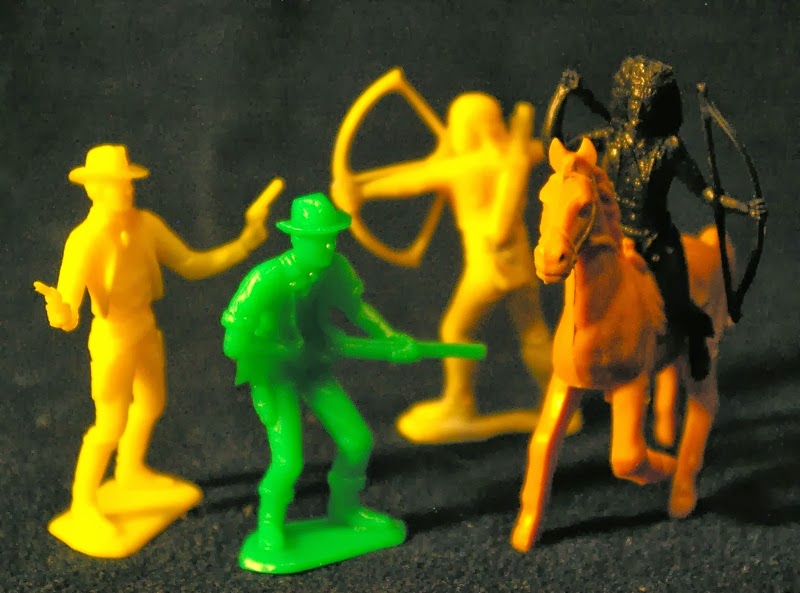 These two horses that share a base were originally attached to a toy stage coach, They are much smaller and out of scale from the ride-able horses. The coach had opening doors and little parcels on the roof. It was way to small to be in scale with any of the figures. 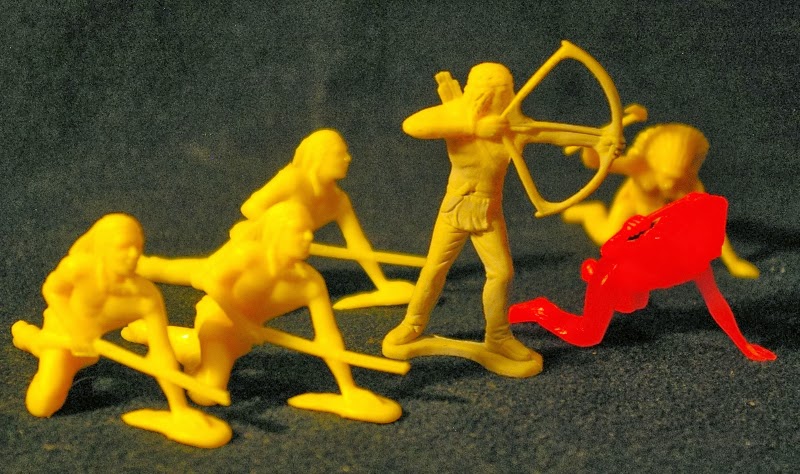 The coach was very uncharacteristic of the rest of the set of plastic figures. The coach and horse used various different colors of plastic and have very fine details. At some point in middle school I broke apart the stage coach and used pieces of it as details for models I was making.

All of these Cowboys and Indians were included in that set. From what I can find online they seem to be made by Tim Mee. I'm not sure if this is accurate or if the molds may have been used by someone else. I got these in the very late 80's.

I remember pretending the cowboys were pilgrims. I played out a Thanksgiving adventure with these figures. I always really like the green cowboy with the rifle. The Indian pulling back his bow was my favorite Indian from the set.

I always thought these crawling Indian figures were a little odd. I have three identical Indians carrying rifles. The other two crawling Indians are carrying tomahawks. I sometimes used to hold the tomahawk wielding Indians as if they were standing on their tippy-toes doing a rain dance. There may have been one of two more figures in the set originally. 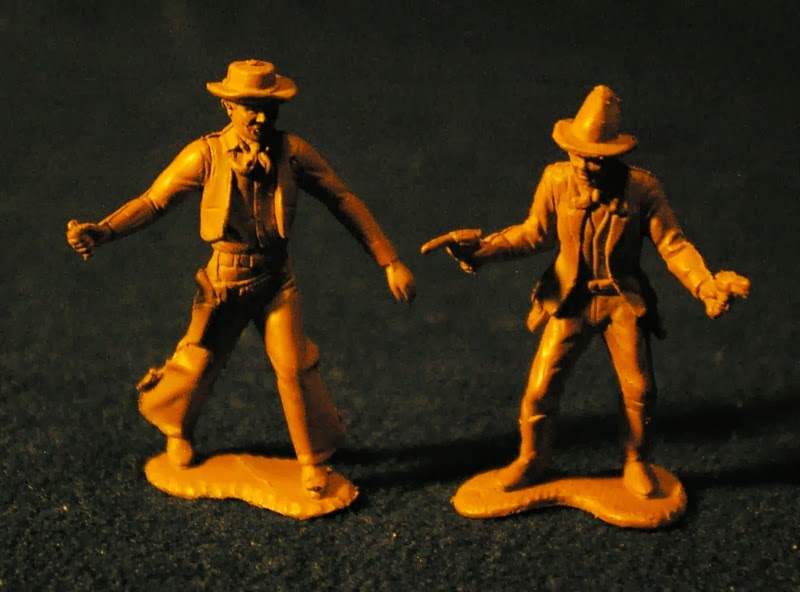 The remainder of the figures in this post came into my collection through means other than that set purchase in one shot.

These two cowboys are molded in brown. One is unarmed while the other has drawn both his six-shooters. 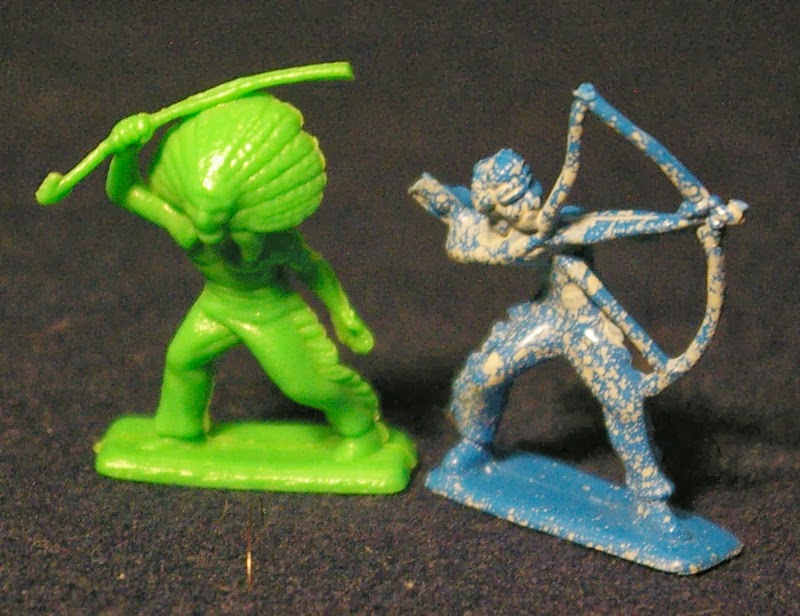 My buddy Derek game (or traded) both of these Indian figure to me when we were kids. The green figure is holding a spear and wearing a large head-dress. The blue figure is pulling back his bow in an action-packed stance. He's been hit with a splash of gray primer. I was going to paint him one time in middle school, but ran out of spray primer. 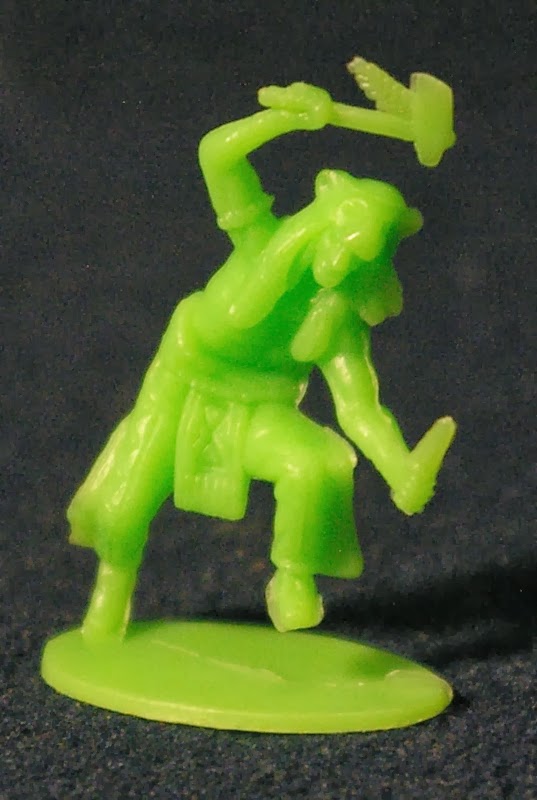 This final Native American (Indian) figures is one of the coolest ones I've ever seen. Again I got this figure from my childhood best friend, Derek. He is wearing a wolf's skin on his head and dancing while holding a knife and tomahawk.

Such a dynamic pose and lots of cool details. I like that he seems to be wearing buck skin pants as well as a loin cloth. 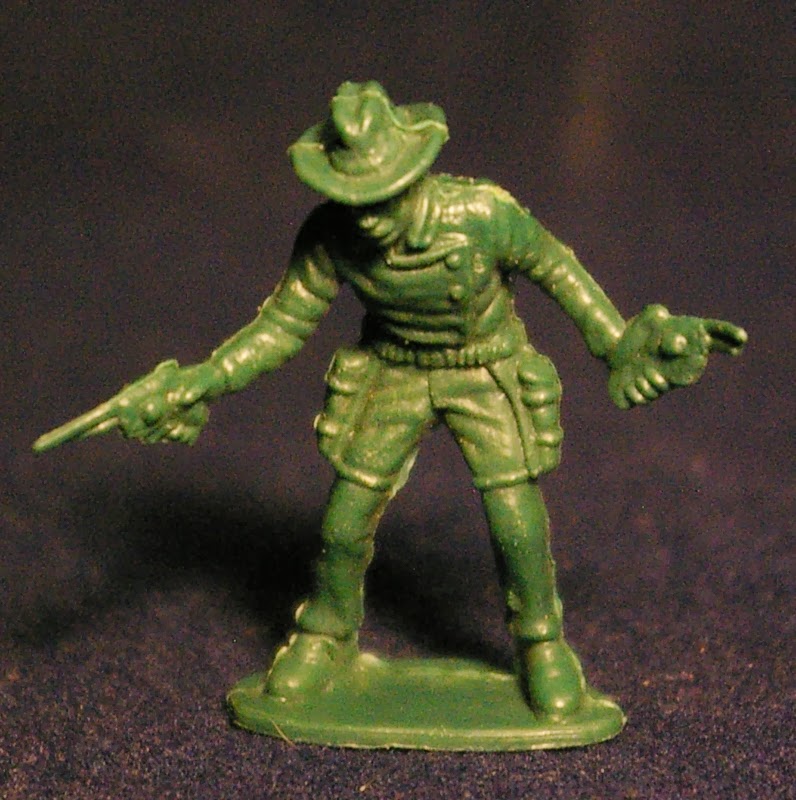 The final cowboy to be included in this post is another "quick draw". I really like all the details in his sculpt. There are buttons on his shirt and straps around his legs from his holsters.

I'm not sure if this figure is really a cowboy or possible one of Custer's Cavalry soldiers.

Again, I have no idea who made some of these random figures from my collection.
Posted by Buzz Chuck at 12:08 AM